HEPARINASE I for DIAGNOSTICS
RESEARCH PAPERS

OUR PRODUCTS
REQUEST A QUOTE 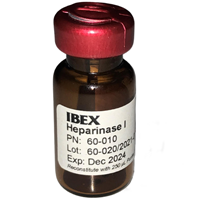 Click here to learn more.
Heparinase I (EC 4.2.2.7) cleaves heparin and to a lesser extent, heparan sulfate. Available as Liquid (Frozen) or Lyophilized. Click the data sheets.pdf icons below for complete details. 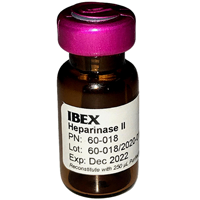 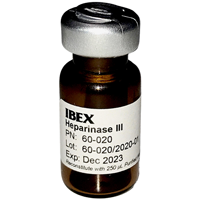 The catalytic targets of heparinize I, II and III are shown in the figure below

Due to its high purity and reaction time, IBEX Heparinase I is the only heparinase used in FDA and EU approved hemostasis-measuring Point Of Care medical diagnostic devices.

IBEX heparinase I is also used in conjunction with many devices which monitor the anticoagulant levels in the patient blood such as the viscoelastic hemostatic Thromboelastography (TEG) devices, INR monitoring devices and many more.

IBEX heparinases are also widely used in the production of low and ultra-low molecular weight heparins.

The IBEX Pharmaceutical’s Quality Management System is certified ISO 13485:2016 for the manufacture and sale of protein reagents and reagent-filled medical diagnostic device components.

In virtually all animal tissues, the cell membranes and the extracellular matrices (ECM) are decorated with glycosaminoglycans (GAGs) such as heparin and heparan sulfate (HS), which are linear sulfated polysaccharides. These GAGs play an intricate role in the ECM, as polyelectrolytes by specifically interacting with growth factors and other transient components of the ECM.

Heparin and HS have been associated with cell-biological processes, cell adhesion and regulation of enzymatic catalysis while HS chains have been shown to interact with a variety of growth factors (fibroblast growth factors and vascular endothelial growth factor), chemokines, ECM proteins, enzymes, and antithrombin. Additionally, heparin and HS molecules were found to mediate the viral adhesion and the infection process and considered as important factors in the host-pathogen interactions.

ABOUT US
IBEX Pharmaceuticals Inc. holds an ISO 13485:2016 certification.